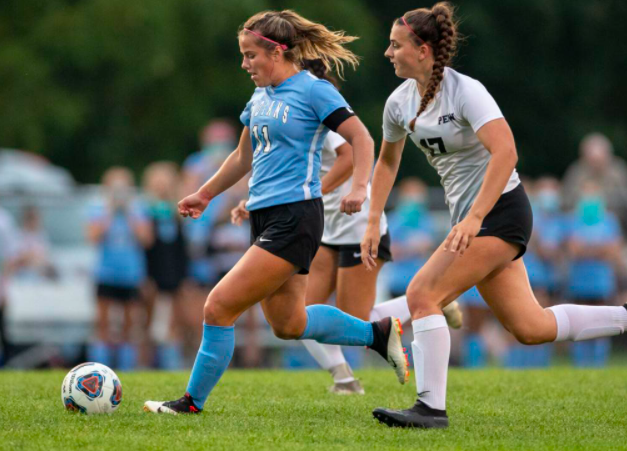 On Saturday September 26, the #3 Saint Joe Girls soccer team suffered their first loss of the season against #4 Guerin Catholic with a score of 0-4.

The lady Indians played a hard fought game against a very strong Guerin Catholic team on a hot and sunny day at Newtown Park, but couldn’t get the job done in their first loss of the season. The teams battled back and forth in the first half as Saint Joe Sophomore goalie Peyton Hull and the Indian defense shut out Guerin’s strong offensive attack to a 0-0 game at half time. Guerin struck first with a goal in the 58th minute as Saint Joe allowed only their second goal of the season. The Guerin Catholic offense became too much for the Indians to handle as they put 3 more goals into the back of the net off a whooping 19 shots on goal. The Indians were overwhelmed by the Golden Eagles possession and shots all game. I talked with senior midfielder Sarah Hiestand on how she felt about the girls first loss of the season, she said, “It was a good learning experience for the team. The game kept us in check and reminded us that in order to beat the best teams we’ll have to play our best soccer.” After the loss the Indians fell 12-1 and down to #7 in the state.

The lady Indians look to bounce back as they travel to rival Marian in The Holy War on Tuesday, September 29th at 7:00 in their last regular season game. The ladies will find out about the 3A playoff bracket on Monday night. The Indians have seen what it takes to beat the best as they look to head to state this year after a disappointing early exit in last year’s tournament. To keep up on the girls season you can see scores and schedule on the Saint Joe website:https://saintjoeathletics.com/teams/2892138/girls/soccer/varsity , follow the girls soccer team on twitter @SJGSoccer. Make sure to come out and support the girls in their last regular season game.