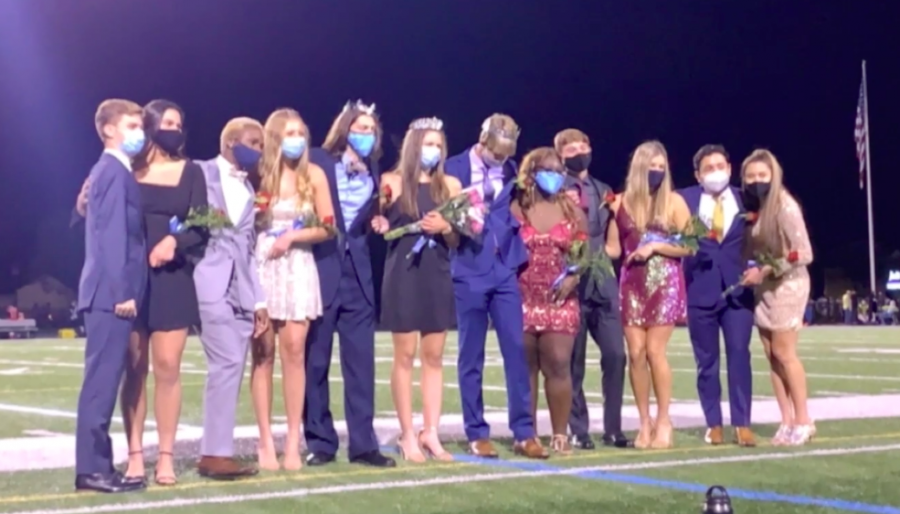 First off, Tessa Berente is partnered with Sean Gibson. Tessa and Sean have been neighbors ever since Tessa to Indiana sophomore year. She was student council secretary junior year and a representative this year. Tessa is the president of SECO club, and is also one of the captains of the cheer team. Sean also is very involved with school, being vice president of National Honors society and is a member of the varsity tennis team. Both candidates also have participated in the spring musical and enjoy listening to Hamilton.

Next, we have Kate Bellia and Ben Appleton. Kate Bellia is a Notre Dame Tennis commit and has played tennis all of her life, including three (soon to be four) years on the Saint Joe varsity tennis team. Katie Bellia is one of the top in the senior class and is overall a very likeable person that everyone enjoys to be around along with her partner Ben Appleton. Ben Appleton also known as “Beans” is one of the many class clowns of the senior class. Besides being a jokester, Beans is very involved in Saint Joe’s drama team doing the fall play and spring musicals every year, always having a lead role to make the crowd laugh.

Also on the court are Sam Jurkovic and Ethan Horvath. Sam Jurkovic is one of the volleyball captains, the only senior to be on varsity all four years. Sam Jurkovic is an all around nice girl that loves sponge bob and loves to make people laugh. One of her best friends is her partner, Ethan Horvath, president of student council. Ethan Horvath has been on the varsity soccer team for four years and also is President of the Best Buddies club. Both candidates are very involved in school spirit and love to represent their school at sporting events.

Next up is Marie Achkar and Aaron Torres. Marie and Aaron have been friends since grade school at Saint Pius X. Marie is a lector at the monthly Saint Joe masses and is very involved with the musical, usually in a lead role of some sort or a role that projects song. Aaron Torres is a well rounded man and a friend to all.

As two more members of the cheer team, Morgan Springer and Camron Frost join Tessa as captains of the cheer team. Morgan is a spokesmodel with Tessa at a local dance company called Movement Made Beautiful and is someone that people describe as having a “contagious and radiant smile”. Camron Frost is the first male cheerleader to ever be on Saint Joe’s cheerleading squad and has been interviewed by local television stations because of the large role he plays in our community. Camron is someone that anyone can talk to because he is seen as very “personable” and “incorporates a positive attitude into everyone’s days”.

Lastly, we have Kayla Mkandawire and Kyle Tupper. Kayla is a very hardworking student that takes many AP courses but always entertains the class with her humor and wittiness. She is seen as a light in the classroom and around others as her smile is very contagious. Her partner, Kyle Tupper, is also very studious. Kyle Tupper mostly known as “Tupper”, is a three sport starting varsity athlete. Tupper is currently in soccer as the varsity goalie, next will be in hockey as the starting goalie, and the finally will be the pitcher in baseball. Tupper is committed to play baseball at Purdue Northwest and is a very respectable student athlete for the grades he achieves while being a stellar athlete.

Who will win homecoming king and queen? Stay tuned during halftime at the Saint Joe versus Penn football game to find out!