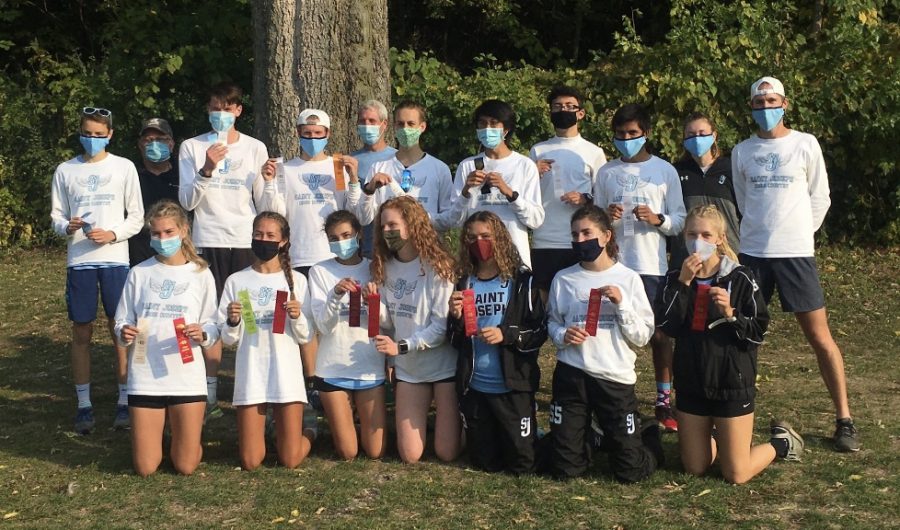 This past weekend, Saint Joseph Cross Country Started their post season off with a very strong finish. In sectionals on Saturday October 10th, the girls team came in second place for the first time since 2011, and the boys team came in third place behind Penn and Riley.

In cross country, there are no divisions so it is an achievement to make it out of each round as much as the other. Sectionals were hosted at Erskine Golf Course in South Bend, followed by Regionals next Saturday at Oxbow in Elkhart, proceeding with Semi State in Fort Wayne and State in Indianapolis. Through each round of cross country, the top 5 teams advance along with the next 10 individuals from the other teams who did not advance – allowing runners an opportunity to keep going throughout the postseason, whether it is as a team or individually.

At Erskine this past weekend, both boys and girls had many honorable finishes. For the girls, Seniors Maeve Kearney and Alexis Kintzele finished Top 9 and 10th places, with Ava Rousseve following in 11th place. As for the boys, Senior Zach Taylor finished in 6th place and Marko Enriquez in 8th. Due to the difficulty of the course, there is a certain award called the “Hoffman Hero” given to runners who can run under 22 minutes on the course for the girls and sub 18 for the boys. 8 runners achieved this accomplishment including: Zach Taylor, Marko Enriquez, Josh Frabutt, Brendan Pruitt, Maeve Kearney, Alexis Kintzele, Ava Rousseve, and Mary Clare Elliot. These 8 runners all also placed in the Top 20 of the race.

Now advancing to even tougher competition, both teams will be participating in Regionals at Oxbow on October 17th; girls run at 10:30 in the morning and boys 11:15. Come support!