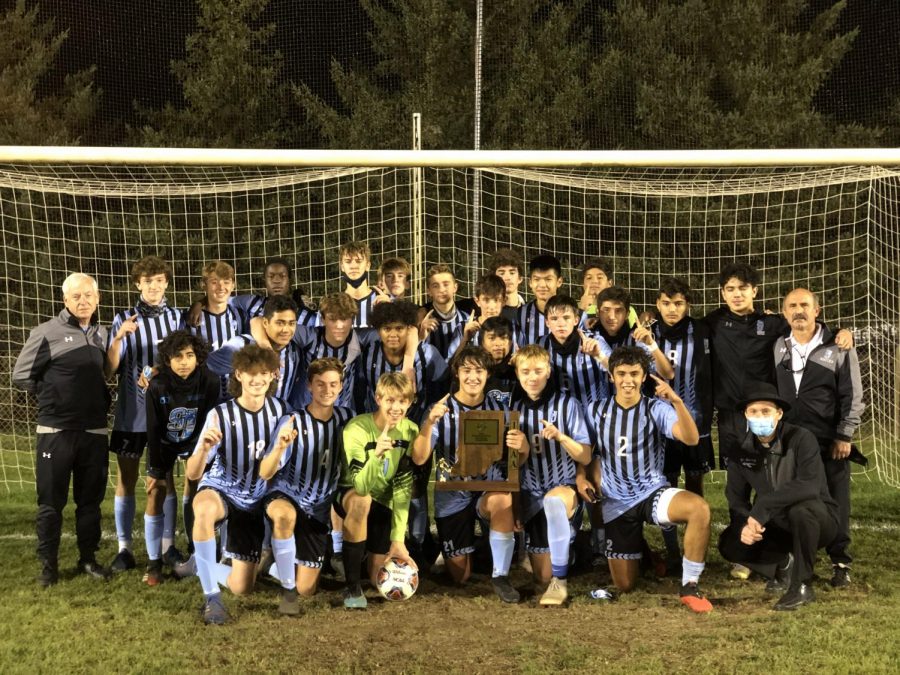 After a shaky regular season performance, it was unsure how this year’s Saint Joe Boys’ Soccer team would fare in tournament play. Now they have emerged as sectional champions and kept their streak of eleven straight alive.

After a decisive 5-0 win over New Prairie in the first round, Saint Joe scraped by a rough Washington team in a game that almost turned ugly. Ryan Larkins scored the penalty that ended up being the winning goal.

On the other side of the bracket, Marian was expected to have an easy run to the sectional final. They were ranked sixth in the 2A division coming into the tournament. They took care of a weak Jimtown team but stumbled against Bremen. In a game in which Bremen controlled the majority of the possession, Marian managed to hold on long enough to survive 94 minutes of open play and force a penalty shootout.

With their starting goalie having been contact traced a few days prior, Marian’s second-choice goalkeeper was tasked with putting the team on his shoulders in the shootout. He saved one of four shots, but Bremen had the finishing touch they needed to seal it and book their ticket to the sectional final.

On a cool Saturday night at the North Fields, it was a contest of two underdogs. Bremen, who knocked off the clear favorite, and Saint Joe, who came into the tournament unranked. Saint Joe had the added pressure of continuing their sectional streak, which dated back to 2010. Bremen, on the other hand, had a chance for revenge against the team that knocked them out last year.

Bremen struck first just under 20 minutes in, but Saint Joe was not ready to roll over. Kyle Smith struck twice, first with a beautiful cross-goal finish and next with a lovely header in response to a searching cross from defender Ryan Larkins. These goals were the 0nes that sealed Bremen’s fate. It finished 2-1.

Saint Joe hopes to replicate last year’s result in the regional against West Lafayette on Saturday at 11am. They will play at Marian high school.