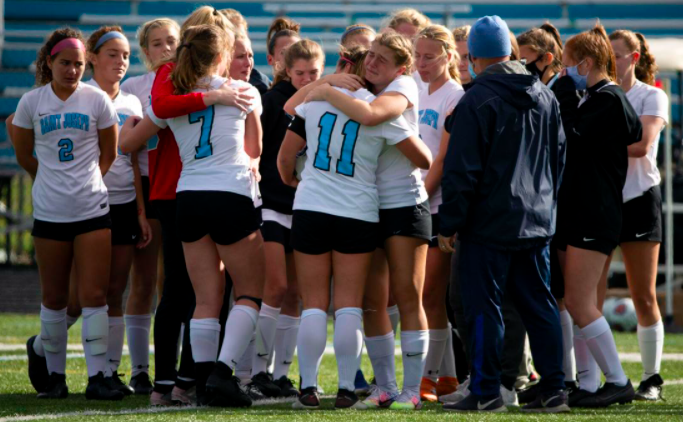 The Saint Joe girls soccer team’s season came to an end on Saturday, as the team fell to #1 Noblesville with a score of 2-0 in semi-state at Father Bly Field.

The game started on a cold Saturday afternoon, but the near freezing temperatures did not affect either team, as both teams displayed their athleticism throughout the match. Saint Joe and Noblesville battled through the first half, as each team looked even physically, mentally, and athletically. However, the pressure by Noblesville became too much for the Indians as Ava Bramblett shot from 20 yards out to put the ball just out of Saint Joe goalie Hannah O’Connell’s outstretched hand. The ball hit the bottom of the crossbar, and went in to put the Millers up 1-0 in the 25th minute. The Millers did not stop attacking after their first goal, and Saint Joe only had a few more attacks in the first half for a halftime score of 1-0.

As the second half started Saint Joe continued to try and push the ball, but the Noblesville defense would not let up. Saint Joe’s NIC MVP Georgia Place and star Natalie Moore could not get much offense going as Noblesville would swarm the two players every time they touched the ball. As the half rolled on it seemed as though the Millers physicality and depth was too much for the Indians. In the 50th minute the Millers scored again off a corner kick to improve their lead to 2-0. The game seemed lost for the Indians, but the girls did not stop fighting. Saint Joe continued to attack and had some promising looks to score, but the shots either missed or were saved by the impressive Noblesville goalie. The Indians continued to play as hard as they could, but the game came to a close with a score of 2-0 as the ladies season came to an end.

Saint Joe finished the season 16-3 with having reached 3A semi-state for the first time. The Indians had a very strong senior class leave the field for the last time after making a huge impact on the girls soccer program for the last 4 years. We are very proud of all the work and success the girls put into the sport and the program. Make sure to congratulate Coach Phil Depauw and the girls soccer team on their impressive season.