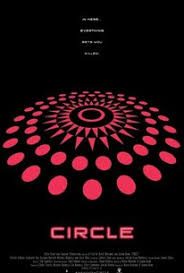 What would you do if you were trapped in a room with 50 random people? You can’t move, or you’ll be killed, and only one person will make it out alive. Who is worthy of safety?

“Circle” is a Netflix movie that was produced in 2015. The movie begins with a room where 50 strangers are together, standing on red circles. A booming voice can be heard, stating that they must choose one of them to live. Somebody tries to run away, but they are instantly killed by a greater force. General chaos ensues, with another person eventually dying.

This is when the group realizes they can vote certain people by moving their hand towards the person they want to vote off. If you have ever seen the TV show Big Brother, it is very similar to eviction night. However, it begins to get interesting when a major divide forms between the group.

The end of the movie reveals the winners of all of the “circles,” many of which are incredibly distraught. Among them are children, middle-age people, and older people.

Overall, I would highly recommend this movie. It is definitely a social commentary, one that explores where people’s morals may lie. I would rate it a 9/10. At times the acting is kind of cheesy, but the plot itself is very good.