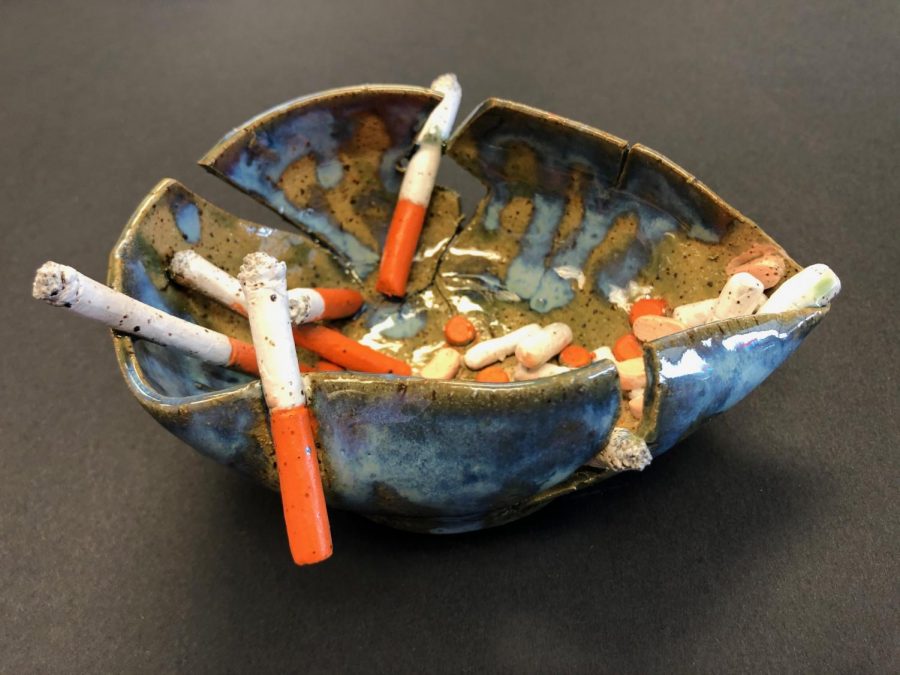 Mairi Weber-Hess first became interested in art when she was very young and has been “doing art for ages.” At the age of 8, an opportunity to take a ceramics summer camp program at the South Bend Museum of Art sparked her interest. Since then, she has attended several other camps – including those here at Saint Joseph High School. Mairi credits Mrs. Coleman with helping her develop a passion for ceramics.

While a student at Saint Joe, she has taken Ceramics I through IV with Mr. Kuharic and is currently taking AP 3D art with Ms. Firestone.  Mr. Kuharic provided her creative freedom in his classes which allowed Mairi to expand and learn new things about glazing. Glazing is a crucial aspect of ceramics. Mairi explains, “A lot of the pieces that I have ended up really liking are ones with more simple forms but where I had experimented more with glazing and colors. There is so much possibility when working with glazes but there is also a fair amount of uncertainty that can be both exciting and challenging. You’re never quite sure how a project is going to end up looking like until you take it out of the kiln after its last firing.”

Already talented as a freshman, Mairi has grown each year but really blossomed last year when she won a Scholastic National Silver Key for her piece “Waiting on Happiness.” Mary recalls, “Winning Scholastics this past year was a little bit crazy because it was the first time I’ve ever actually submitted to the art portion of the Scholastic Art and Writing”. The piece “Waiting For Happiness” is a bowl filled with cigarettes and pills – providing a commentary on people’s reliance on substances. The realism of the work showcases Mairi’s ability to craft her pieces with incredible accuracy.

Scholastic deadlines are quickly approaching. We look forward to featuring more of what Mairi and all the other artists will create this year.