Why You Should See Game of Tiaras 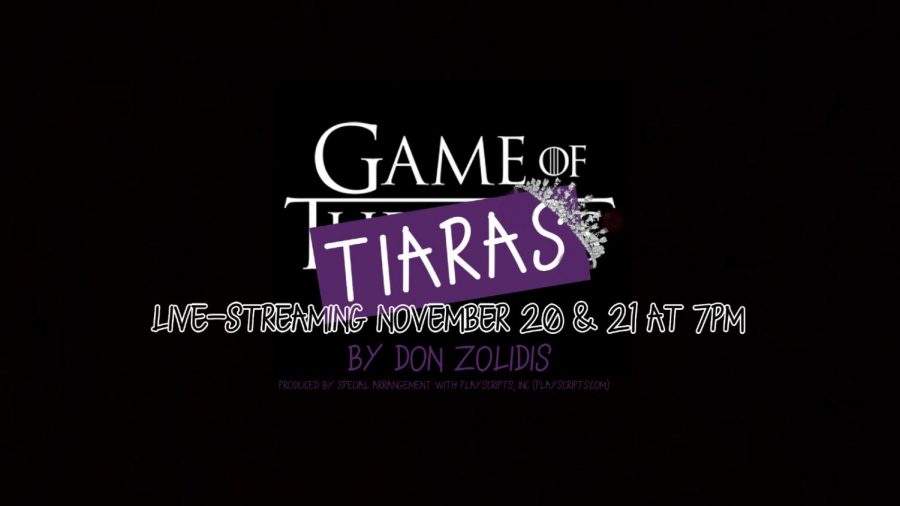 As many of you may know, for the first (and hopefully last) time in history, the Saint Joseph High School Theater Department will stage an all-virtual performance this Friday and Saturday. Beginning at 7:00, the performances can be attended in the comfort of your own home thanks to everyone’s favorite piece of technology, Zoom! Here’s a small preview of what you can expect when you log on.

Firstly, this year’s play is a production called Game of Tiaras, and was written by Don Zolidis. The show follows the basic plot of the Shakespearean play King Lear, originally completed in 1606. (Ironically, King Lear was mostly written as Shakespeare was confined to his house due to an outbreak of the Black Plague–something that hits a little bit closer to home in these current times). However, the basic plot is where the Shakespearean influence ends. The rest of the play is framed as a parody of both Game of Thrones and various Disney animated classics. Overall, the show is designed to look as if it came from the mind of a child playing dress-up, and director Sarah Beason has used this for inspiration in all of the show’s costumes and props. Expect the more violent parts of the show to be acted out using plastic swords, Nerf guns, and the occasional balloon. And yes, blood will be spilled. How this will work over virtual, is something you’ll have to see for yourself.

Quite possibly the biggest reason to tune in to this year’s production comes in the form of the actors and actresses that bring the ridiculous characters to life. Your guides are two hilarious narrators in the forms of junior Molly Jachim and senior Jared Cain, while the titular  King Lear is played by Homecoming King Benjamin “Beans” Appleton. The story largely follows his 3 daughters, Cinderella, The Snow Queen, and Belle (played by Felicity Nolan, Martha Cleary, and Maggie Mark, respectively) in their quest for control of a magical kingdom called England. Only one can win the throne, but none will go down without a fight. A complete cast list is available on the Theater Department’s Twitter account (@SJHS_Theatre).

In terms of tone, this year’s production couldn’t be further away from last year’s Almost, Maine and The Music Man. Game of Tiaras is a hilarious, lighthearted, screwball comedy that keeps the audience guessing at nearly every turn. “It’s a really dramatic and funny [show], and we actually have a lot of mobility over Zoom” said sophomore Luci Flanagan. “I think we’re having more fun with it by coming up with ways to make the jokes work while distancing, and the end result reflects how much effort we put into it”. Clearly, this show is not something that anyone would want to miss. Tickets can be purchased by using one of these links for your preferred performance. You should be taken to a page with the Game of Tiaras logo.

Then click “pre-order now”, sign-in or create an account , and choose the appropriate price. Once you’ve then filled out the proper billing information, and hit confirm order, you’re all done! The theatre department hopes to see you there!