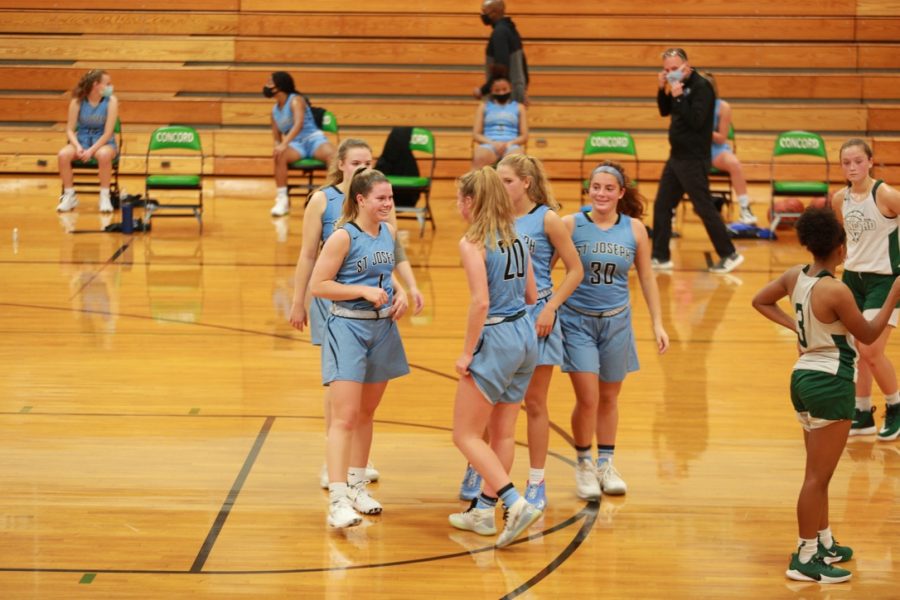 After a tough loss to New Prairie to begin the season, the Saint Joe Girls Basketball team rallied to defeat Clay 62-39. Rolling off this victory, and heading into the Holy War on Saturday, the girls have gained confidence and are ready to compete.

With improvements on the defensive end for the Indians, they were able to hold Clay to under 40 points. Both Sarah Hiestand and Hannah Tyler had great scoring performances, Hiestand scoring 20, and Hannah with 17. From the last buzzer, with the guaranteed win for the Indians, their minds shifted to the Holy War. The Holy War always has high stakes for Saint Joe, having gone 19-4 in the last 23 appearances, and defeating them last year in overtime in the regular season. Marian defeated the girls team in the sectional semifinals to end their season last winter. The past few years, the battle between the two catholic schools in the area has been an exciting and close game. This year, fans expect the same.

As the underdogs in the game, Saint Joe hopes to upset Marian on Saturday. The girls gain back an important starter, Kelly Ratigan and believe the team is being underestimated. Marian has an inclination to be cocky, and the Indians are hoping to exploit this. Key matchups to lookout for in the game are Naveah Foster vs. Sarah Hiestand and Kelly Ratigan vs. Mackenzie Hudgens. Naveah Foster, Mackenzie Hudgens and Makaya Porter account for 85% of the team’s scoring. It is key to stop the three superstars on Marian. The girls are looking forward to this opportunity and are ready to play. Few think the team will win, but who doesn’t love a good underdog story? The Saint Joe squad is ready to give the people what they want. Go Indians!