The John Hughes Reviews: Looking at Some Classics of 80’s Film 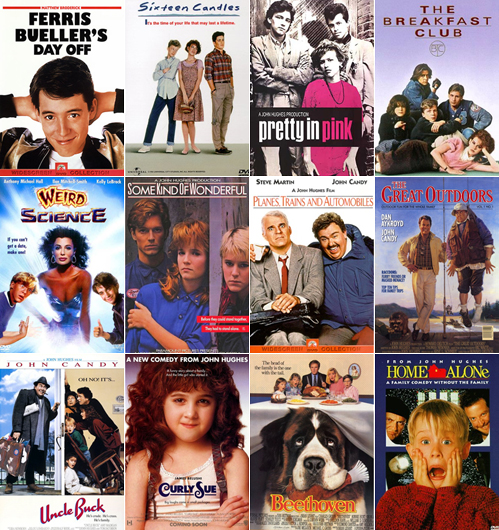 Looking for something to watch over the upcoming holiday break? Perhaps something relatable, funny, and often heartwarming? Look no further than the works of the late, great, 80’s filmmaker John Hughes. Hughes gave the world some of the most iconic movies in pop culture, and despite their age, they hold up as a whole extremely well to this day. Before you dive in blind, let’s take a quick look at a few of these classics to see if they’re worth your time.

An entire generation of incoming high school students had their experiences tainted when they realized that high school was not exactly like Sixteen Candles. That doesn’t mean that the movie is worse for it though, as it has a little bit of something for everyone. The comedy is hilarious, the trials and tribulations of the main characters are relatable, and the romance is believable and heartwarming. The main plot revolves around a sophomore girl, Samantha, trying to catch the eye of a senior boy named Jake, while also dealing with a family busy enough with her sister’s wedding to forget Samantha’s birthday. While it sounds simple, the ensuing hijinks are hilarious and memorable.  The only negative really present is a very outdated Asian stereotype character, which does make certain scenes uncomfortable to watch from a 2020 perspective. There also is a lot of talk about sex, which does make sense from a story point but warrants a warning to not watch with younger siblings in the room. The entire latter part of the movie also could have been solved with a modern cell phone, so that does hurt a bit of the relatability. Aside from these, Sixteen Candles is a highly relatable film that everyone should consider watching. 8.5/10

Weird Science is a…well, quite frankly weird movie. It definitely is more comedic than heartwarming or relatable, so watching this directly after Sixteen Candles like I did is definitely a major tone shift. This also was the movie that has held up the least over time, as there is a much larger emphasis on the technology of the 1980s. Two teenage geeks are tired of being embarrassed with girls at school, so they decide to create their own woman to be with, using the power of computers. (At least, they use a computer to digitally construct one, but it’s never truly explained how this is possible. If anything, it’s more likely chalked up to magic, but this also isn’t explained.) Hilarity then ensues. Like Sixteen Candles, there also is a healthy amount of talk about sex, so this too is a movie that shouldn’t be watched with smaller children in the room. Overall, Weird Science is alright, but the various plot points are a bit weak, the acting could be better and the message it tries to convey falls a bit flat. It does get points for starring a young Robert Downey Jr. though. 5.5/10

First off, Pretty In Pink is by far the most romantic out of the movies reviewed here. At its core, the plot revolves around two high school senior boys, the outsider Duckie and the popular Blane, trying to win the heart of the main character, Andie. There also is a heavy theme of class division between the poor and the rich at the local high school, which adds a nice sense of depth to the relatively standard love triangle plot. Yet the movie is a bit unmemorable at times, and the ending (which was reshot after the original one tested poorly, to the disdain of Hughes) isn’t necessarily the most satisfying. However, it has probably aged the least out of the five movies reviewed here, with many of the boys looking like they could be walking the halls of St. Joe today, and very few plot points having to do with any kind of technology (or lack thereof). Essentially, this is a good movie that does a lot of things just alright, but it definitely has some flaws. 7/10

I’m probably a bit biased with this review, because Ferris Bueller’s Day Off is one of my favorite movies of all time. Yet that is because it seriously is an absolutely fantastic movie. There isn’t a ton of emotional challenges here, but it is instead just a delightful romp through everything Chicago has to offer. The fun that Ferris, Cameron, and Sloane have while ditching school on a beautiful day is so great, that it feels like you’re right there with them. The dialogue is hilarious, the characters feel so alive, and the whole 103 minutes you’re watching this film absolutely flies by. This movie is just fun. That’s all it is. This film is quite honestly the best advertisement for the city of Chicago I’ve seen, as I seriously want to go there and follow in Ferris’ footsteps. No more words, just go watch it. 10/10

The second half of Home Alone is one of the best Christmas movies that I’ve seen. It’s both heartwarming and hilarious, and we see real character development from Kevin, the main character. This second half of the movie actually makes me understand why everyone seems to rave about the film so much. That said, the first half is tough. Every single character in the movie is a massive, unsympathetic jerk. While I understand that that is the point of Kevin’s family, Kevin is just as mean right on back. He’s genuinely hard to root for. This aside, the way the film’s plot kicks off feels really discombobulated as well. The main plot itself seems quite feasible, but the way it begins is such an unlucky series of events that it’s really hard to watch. The second half does vastly improve on a lot of these errors, and the way that Kevin’s mother sacrifices so much to get back to him is honestly very touching. The movie also has aged pretty well, with the exception of the fact that it too could be largely solved with a modern cell phone.  A few plot holes aside, once the robbers’ plan is revealed, Home Alone seriously is a fantastic film. However, the beginning doesn’t leave the viewer wanting more, and is quite uncomfortable. Hughes’ previous Christmas entry, National Lampoon’s Christmas Vacation, might be the better option to go with around the holiday season.(5/10)