Notre Dame vs. Clemson. Round Two 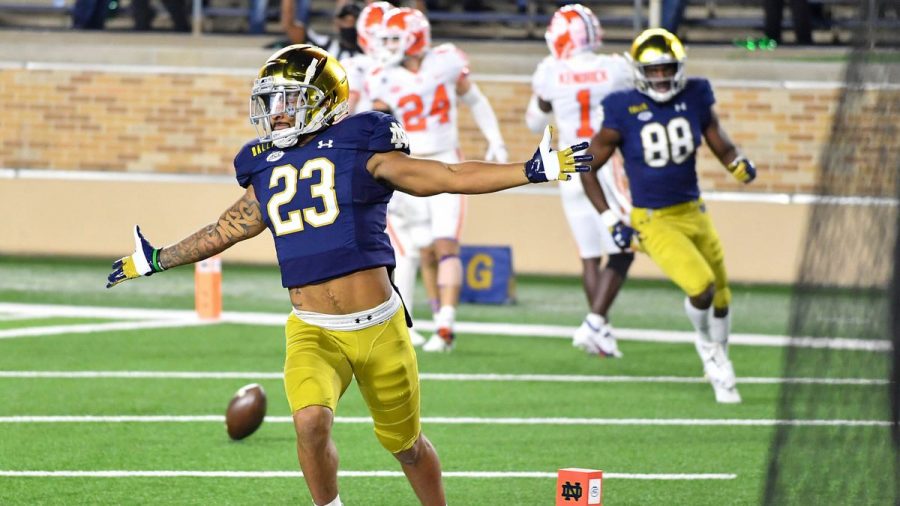 The Notre Dame football team will play for the ACC Championship in a rematch against the Clemson Tigers this coming Saturday, December 19, 2020.  In the last meeting between Notre Dame and Clemson earlier this year, Clemson sat at number one in the college football rankings, and Notre Dame sat at the number four spot.  The Irish pulled off a double overtime upset to knock the number one team in the country.  For Saturday’s game, Notre Dame is now holding the number two spot, and Clemson hangs on at number three, not far behind.

Clemson head coach, Dabo Swinney on the Rich Eisen Show this week told the host, “We feel like we’re definitely one of the best four teams in the country, and there’s nothing that’s going to happen in that game next week for Clemson or Notre Dame that’s gonna change that, in my opinion.”  This is the first year that Notre Dame has played in the ACC, and as a result of their dominant success, they stand at number one in the ACC, qualifying them to play in the ACC Championship at Bank of America Stadium, in Charlotte, North Carolina.  If, for any reason, the ACC Championship Game does not happen, Notre Dame will be declared the winners of the ACC, due to their win against Clemson back in November.  Limited spectators will be allowed into the stadium, but tickets aren’t easy to come by.  Tickets for this matchup are selling from anywhere between four thousand and seventeen thousand dollars, Super Bowl value.

Irish head coach, Brian Kelley at his press conference this week said, “Really excited about the opportunity to be in the ACC championship, our players are, and our entire Notre Dame fan base is as well.  This opportunity doesn’t come along very often for Notre Dame, playing for a conference championship, so it should be exciting.”

The ACC graciously allowed Notre Dame to play in the ACC this year due to the lack of scheduling because of COVID-19, and their success in the ACC has led them to the conference championship.  In addition to playing for this title, Notre Dame is projected to face Alabama in the Rose Bowl, the current number one seed versus the current number two seed.  ESPN analysts are projecting this matchup occurs, following another meeting between Notre Dame and Clemson in the semi-finals.  The Irish have a lot ahead of them, to say the least.  But before the College Football Playoffs begin, there is business to take care of in Charlotte, on Saturday.  Kickoff is at four p.m. and the game will be broadcasted on ABC.  Tune in to watch a rematch that will be physical, competitive, and a once in a lifetime opportunity for the Notre Dame Fighting Irish.