The Sky is the Limit for Saint Joseph Graduate Dolan Gilbert 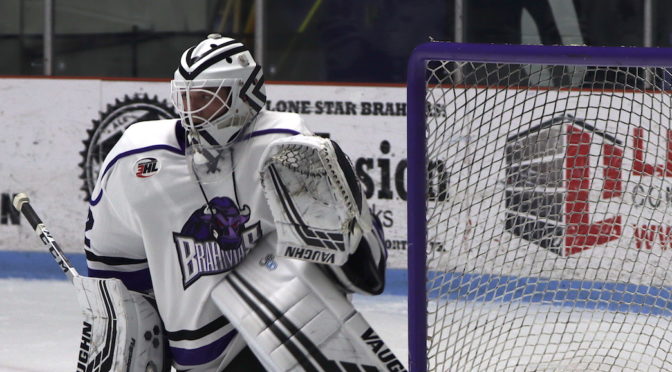 Saint Joseph High School Hockey has a host of legendary names that have risen through the ranks; Kleva, McNeill, and Potter are famous names of some of the greats in program history. But a new name that should be added to that list is that of goaltender Dolan Gilbert. Perhaps the greatest goalie to ever stand between the pipes of Saint Joe’s net, the 2019 graduate has continued his hockey career and has big dreams for the future.

Currently playing for the Texas Brahmas, Dolan has always been a statistical superstar. His senior year, he posted a .925 save percentage. For context, the average save percentage among National Hockey League goalies in 2019-2020 was .910. This figure was not just a high school fluke. He put up a solid .902 with the Ohio Junior Blue Jackets in his first year out of high school and most recently earned a .926 with the Brahmas. The level of play that Dolan is seeing is miles above the high school level, as would be expected. In an interview, Dolan said “The level I’m playing at now is different because it’s a lot faster, the play moves quicker, and the shots are harder.” After all, Dolan is playing against players that were all the best players on their high school clubs, but based on his numbers, Dolan has learned to adjust to this increase in pace very quickly.

Despite the high level of competition Dolan now enjoys, he will never forget where he came from. Being an assistant captain at Saint Joseph, the Indians program still has a special place in Dolan’s heart. “High school hockey at Saint Joe is special because you’re playing for something bigger than just yourself and the team” he said. “Students are in the stands, people talk about it in class, and you want to win for them. It’s a lot of school pride.” Indeed, high school hockey does have somewhat of a cult following. At Saint Joseph, when the basketball team is not playing, students are often seen flocking to the ice box to see the hockey team play. Intense rivalry games with crosstown schools like Adams and Penn three or four times a year tend to bring out numbers akin to those seen at a high school football game.

Gilbert has taken more than just school pride away from his time on the ice at Saint Joseph. He has also learned some values that he continues to put into use for his future hockey endeavors. He’s always been a hard worker, and sometimes to be a successful hockey goalie it is more important to be in the right position than it is to react quickly. Dolan proved this, as he was never really the flashy type. He does not need to be. He is one of the most fundamentally and technically sound players that the Michiana High School Hockey League has ever seen. While not being the most superior athlete on the world (although he was plenty athletic to get the job done) Dolan was endowed with a fantastic hockey mind, the ability to be in the right place at the right time, and the unteachable ability to never know when he is beaten. It is this hard work that separates good goalies from great ones. Dolan will be the first to tell you that the mental side of the game is just as important, if not more, than the physical one. Perhaps his biggest strength is his work ethic. “Saint Joe hockey prepared me…by emphasizing hard work in order to earn trust from your teammates and coaches.” Dolan stated. Indeed, Dolan not only proves that hard work beats talent when talent doesn’t work hard, but also that having both these traits, talent and a strong work ethic, is what it takes to get to the next level.

Blessed with a great hockey mind, Dolan is highly intelligent on and off the ice. He was an outstanding member of the National Honor Society and a Saint Joe Scholar. He boils down his academic success to the same factors as his athletic achievements; hard work and smart planning. “Saint Joe prepared me for the real world by teaching me how to work with deadlines and manage my workload.” These are some words that are echoed by many Saint Joseph graduates time and time again. Although Dolan has not yet attended college, he feels like he is very well prepared for that workload when the time arrives and owes this to Saint Joseph for their outstanding college prep curriculum.

On the topic of college, Dolan knows that his hockey and academic journey is far from over. Once he has made his mark on the NAHL with the Lone Star Brahmas, he plans to move up to a higher level of junior hockey and eventually play in college. Unlike other sports, like football, basketball, or baseball, there are numerous steps between high school and college hockey. While it seems strange that players will play in the minor (or “junior”) leagues of the hockey system, it is actually extremely commonplace for players to play two, three, or even four years of junior hockey between their high school graduation and their hopes of playing professional. Dolan is a lifelong Notre Dame fan and would surely love to be called upon to play there, but in the end he wants to play wherever will give him the best chance of playing at the professional level. He said “my goal is to earn a division 1 hockey scholarship and my dream is to pursue a pro career.” Dolan certainly has the talent and work ethic to make it to those levels, and he is definitely on the right path to do so, as the Brahmas have produced many NHL and Division 1 talents. Regardless of where his journey takes him next and onward into the future, Dolan is a legend of Saint Joe Hockey and a true embodiment of what a Saint Joseph graduate should be. Athletically, academically, and personally.