From Saint Joseph to the Mayor’s Office 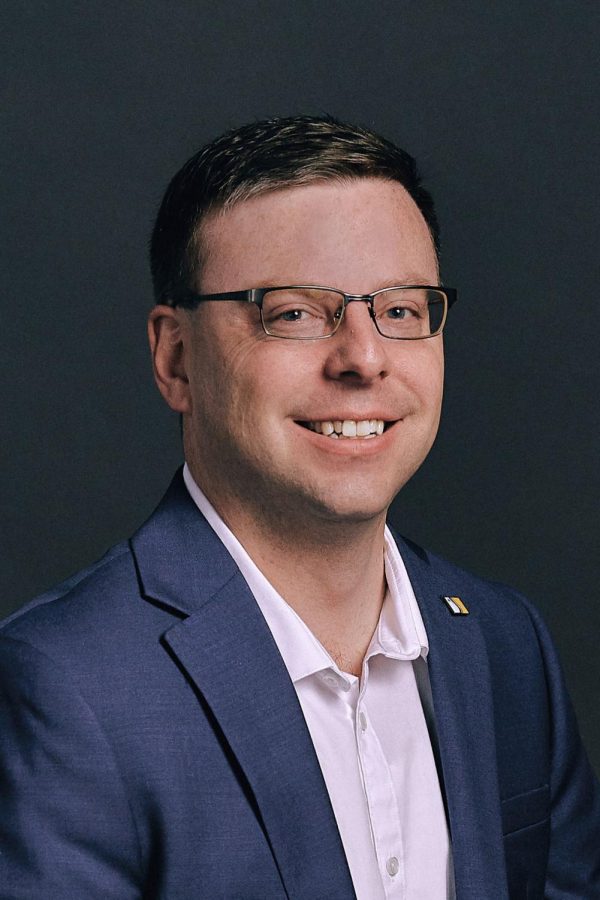 After being sworn in on January 1st, 2020, Saint Joseph alumni James Mueller looks to better his community as Mayor of South Bend.

Growing up in South Bend, Mueller lived as a youth with his parents and four other siblings in the Sunnymede neighborhood. He attended St. Anthony de Padua grade school before studying at Saint Joseph High School and remained in his hometown by attending the University of Notre Dame where he majored in philosophy, history, and math, and received his bachelor’s in 2004.  Mueller then attended the University of Delaware, where he received a PhD in oceanography after studying ocean sciences and engineering.

Upon graduation, Mueller took the position of director for the Solar Institute at George Washington University in the nation’s capital of Washington, D.C.. Afterwards, he worked as a John A. Knauss Legislative Fellow in the office of Senator Maria Cantwell for whom Mueller advised on policies regarding natural resources and energy in addition to working closely with various affordable energy solutions.

However, after his start in politics and advising, Mueller was offered a job by South Bend’s mayor Pete Buttigieg. Buttigieg, an alumni of Saint Joseph, appointed his former high school classmate James Mueller to be the chief of staff under his administration in 2015. In this position, Mueller was instrumental in the creation of various projects for his hometown, such as the Department of Venues, Parks and Arts and the Department of Innovation and Technology for the city. After two years of serving as chief of staff, Mueller became South Bend’s executive director of Community Investment on April 24th, 2017, “where he was responsible for attracting businesses to South Bend and investing in the neighborhoods”, according to his office’s website.

On January 24th, 2019, Mueller announced that he would be running for the role of South Bend’s mayor, after former mayor Pete Buttigieg expressed that he would not run for a third term one month prior. At the time, it was uncertain how Mueller would fare in the election, as he had not received as much name recognition as other candidates, and had no  experience as an elected official. However, with the endorsement of Saint Joseph alumni and former mayor Pete Buttigieg, Mueller became a popular candidate in the running. He emphasized that he would follow the city’s core values – “treat people well, work humbly, and get the job done” – and promised to “Keep South Bend Moving Forward”, which was his campaign’s slogan. “We want to keep the progress and, of course, there will be tweaks here and there, but generally we’re trying to just to keep this progress going,” he said to WNDU after his announcement.

On November 5th, after becoming the Democratic mayoral nominee in May, James Mueller became the 33rd mayor of the city, and beat Republican nominee Sean M. Haas, a former classmate of his at St. Anthony de Padua grade school. He was sworn in on January 1st, 2020.

As mayor of South Bend, Mueller prioritizes “strengthening education from cradle to career to set up every child for success.”  His policies are focused on “reforming [South Bend’s] public safety systems to make us all safer” and encourage local economic growth.   Roughly a month into his time as mayor, James Mueller began to form his leadership team by appointing Michael Patton and Maurice Scott, two individuals that would focus on diversity compliance and inclusion, community initiatives, and violence prevention among younger demographics.

However, given that Mayor Mueller was sworn into office in 2020, he has had to deal with the large issue of racial inequality in the United States. When discussing the topic with ABC57 News, Mueller said, “I’ve been proud that [South Bend] has come and demonstrated to press for racial justice.” Additionally, he said that “this is not a new issue, but it’s something that not everyone was as aware of as they are now.” He strongly believes in the power that a population’s voice can have on racial justice, and looks forward to change that can be driven by the people.

In addition to the violence and protests that have stemmed from racial inequality, Mayor Mueller has had to tackle the issue of COVID-19 and its impact on the South Bend community. He has emphasized the power of community and lending hands to those in our city by saying, “In times of crisis, it’s important we support each other” (South Bend, Indiana’s website). According to the South Bend Tribune, Mueller stressed at a recent press conference that “what we’re asking you to do is care about your family members and your friends” and to “do the right thing to keep them safe.”

In sum, Saint Joseph alumni James Mueller has had an impactful and diverse career in politics since his time in high school, and is excited for the opportunities that will be presented in the future.