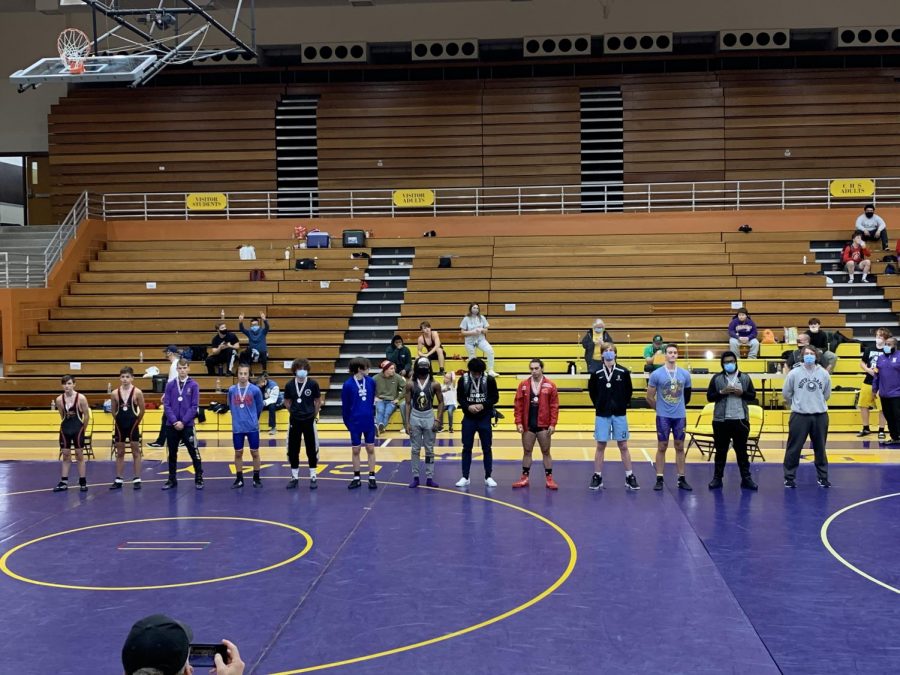 Though this year has been crazy, and the realization that nothing is ever certain has hit us hard, the Saint Joe Wrestling team is proud to say that they were able to set off their season properly. Saturday, November 21st, the Indians were summoned to the Clay Colonials gymnasium for the first super meet of the year. They faced off against the likes of Clay, Washington, Westview, and Adams. For their first face off against Westview, the team managed to come out on top with a combined score of 66-60. This accomplishment was met thanks to standout performances from Zach Kennedy and Amarion Parker.

The Saint Joe Indians continued on with their hot streak of team victories, towards John Adams. Though the Eagles proved to have a better number in personnel, the sole 160 weight class matchup proved to be the deciding battle for the win. Though much pressure was held, Amarion Parker showed none of it. He proved to be the victor of an intense, two-period, battle with a pin in the 21st second of the second period. Once again, the efforts of Junior Amarion Parker helped propel the team further towards success. The Saint Joe Indians went onto their final meet with Clay, at a 3-0 team score.

The final meet proved to be a tougher matchup for the Indians, but not one that seemed to be impossible to overcome. Though only three matches were played, the Saint Joe Indians knew very well that those three matchups would be crucial and decisive for the final outcome of the match. A hard fought battle was set, and Saint Joe did not manage to come out on top for this one. Jacob Marscola, 195 weight class, had a hard fought matchup which ended up with him being pinned at the 0:53 marker. With a pin at the 1:07 marker in the second period, Zach Kennedy helped secure his third win of the morning. Amarion Parker contributed his fair share in an intense three period battle, which ended with an Amarion Parker pin at the 1:38 marker in the third period. Both wins by the Junior duo were not enough to help the team come out on top against the Clay Colonials.

The morning ended with our Indians coming in a very close Second Place finish with a record of 3-1, only following up the Clay Colonials in first. Though the night was not met with the desired result four of our wrestlers managed to come out on top in their weight class; Zack Kennedy, Amarion Parker, Jack Aronowski, and Brady Ferrel; earning medals in their prospective weight class. The Indians face off against Clay this Wednesday, December 2nd, at Saint Joseph Main Gym.