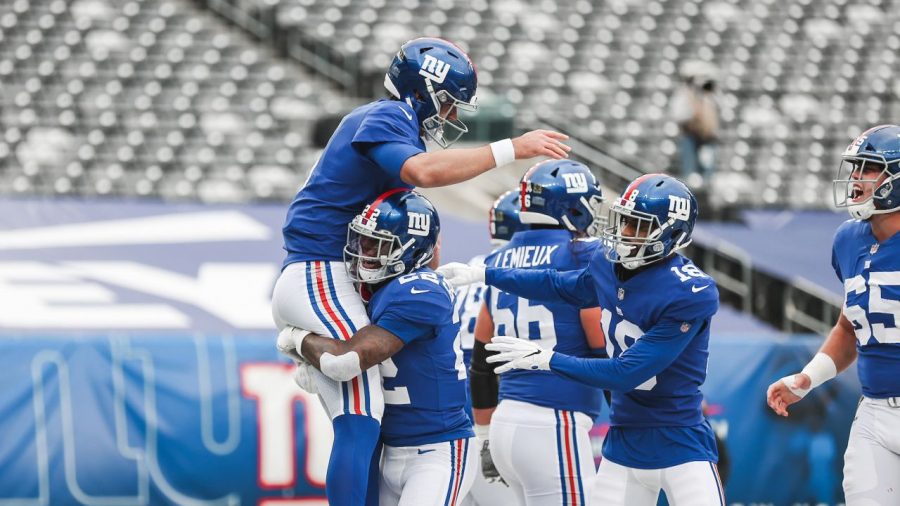 Daniel Jones and the Giants offense celebrate a touchdown in an empty Metlife Stadium.

The 2020 NFL Regular Season was one that no one will forget, but not for reasons that one would consider typical in a usual year.

Everyone knew that the COVID-19 virus would impact the season, but no one knew how bad the effects would be. Would games be cancelled? Would the season as a whole be cancelled? Now that the regular season ended just over a month ago, it’s important to reflect on what made this season so unique.

From March to August, the harm of the pandemic was clearly noticed in the NFL. Offseason activities were practically non-existent, as no one could practice or hold meetings in-person. Activities were held to Zoom Calls and at home, and this meant the cancellation of the four preseason games that each team would have to truly evaluate their players in a game-like situation. The lack of a true offseason and preseason was devastating to players and coaching staffs, and many blamed the lack of one for their poor performance or many injuries. Sadly, the adjustments to the season didn’t end once the regular season began.

To make the regular season safe for everyone involved, adjustments needed to be made regarding how the games operated. For starters, there would be no international games or Pro Bowl to celebrate the best players of the season. Also, any player had the option to opt-out of the season, and earn up to $300,000 as a stipend. Sixty-six players opted out, each with their own reason to do so.

Looking at the three other major sports leagues in the United States, it appeared that the NFL would eventually join them in cancelling at least one game during the regular season. However, thanks to the great work by NFL employees, no games were cancelled. That doesn’t mean games weren’t postponed though, as that happened multiple times throughout the season. The first postponement occured on September 30th, as several Tennessee Titans players tested positive for COVID. The Titans were expected to play the Pittsburgh Steelers on October 4th, and the game was rescheduled to October 25th. Tennessee-Pittsburgh was one of six games postponed, and these six postponed games affected many others. Still most fan would rather take a postponed game over a cancelled one.

Actual attendance at games was a real question mark entering the season. A majority of teams allowed no fans in September, but as the weeks progressed and teams gained more experience, stadiums slowly began to open for fans. 19 of the 32 teams, or just under 60%, allowed fans for at least one regular season game. The stadiums had limited capacity, of course, with the highest capacity being the Dallas Cowboys allowing 25% of their stadium’s capacity, or 20,000 people.

All of this news about postponements and no fans is bleak information, but I thought it would be fit to mention how the 2020 NFL Season will end on a high note. For Super Bowl LV in Tampa Bay, 34% of Raymond James Stadium’s capacity will be available, or just over 22,000 seats. Courtesy of the NFL, 7,500 of these seats will be reserved for healthcare workers from around the nation as a thank you for their hard work over the past year. This year’s NFL season had many lows, but  it serves as a reminder to look forward to next season, and to be excited for it.