SADD Club: Body Positivity in the Month of February 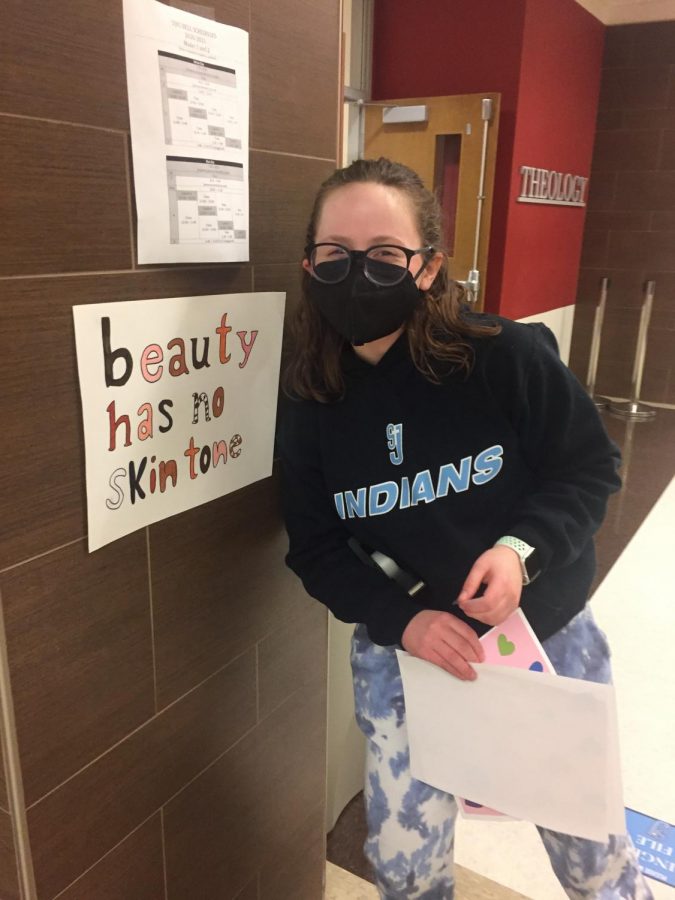 This February is Body Positivity Month for St. Joe’s SADD club (Students Against Destructive Decisions). To celebrate all bodies as beautiful, SADD club students used their Flex Day on Wednesday, February 3rd to meet at school and brainstorm ways to show St. Joe students it’s okay to be different!

Once at school, the SADD club members organized and executed various body positivity activities. They hung colorful posters and wrote hundreds of sticky notes with body-positive messages. The posters were then hung around the school, while the sticky notes went on mirrors in the various bathrooms around the building.

Participating students included Club Presidents Lily Pracht and Luke Reynolds. Luci Flanagan, Gabby Trinter, Braedon Troy, Grace Mazurek, Lauren Eggleston, and Natalie Feldkamp were also present in person to write notes and hang posters. Many other students worked from home, choosing to Zoom into the meeting. Although not there physically, they brainstormed ideas and messages for February’s theme as well.

The body positivity didn’t end there, though. Seth Badics and Emmanuel Thomas worked together to create themed music to celebrate body positivity, citing the unofficial catchphrase of SADD’s project for the month, “It’s okay to be different.” Member Luci Flanagan in particular made a special effort to include posters for not only body size and shape positivity, but also body color positivity, February simultaneously being Black History Month, after all.

“We’re hoping to gain more students and reach more students, especially ones outside of our current grade level,” SADD president Luke Reynolds said when asked on Wednesday about some of the club’s long term goals for SADD and St. Joe.

Being a relatively new club, the group has faced many difficulties in gaining interest, acknowledgement, and members from the school’s community. This has left it a sophomore-dominated group, although the group is, of course, extremely welcoming of all students. “We just want to keep doing good and spreading positivity!”

Moving forward for the rest of the year, SADD is currently preparing for Suicide Awareness Month in March. Members are already planning to sell Pura Vida bracelets to raise money for suicide prevention and funds for the club. Don’t forget to pick one up!