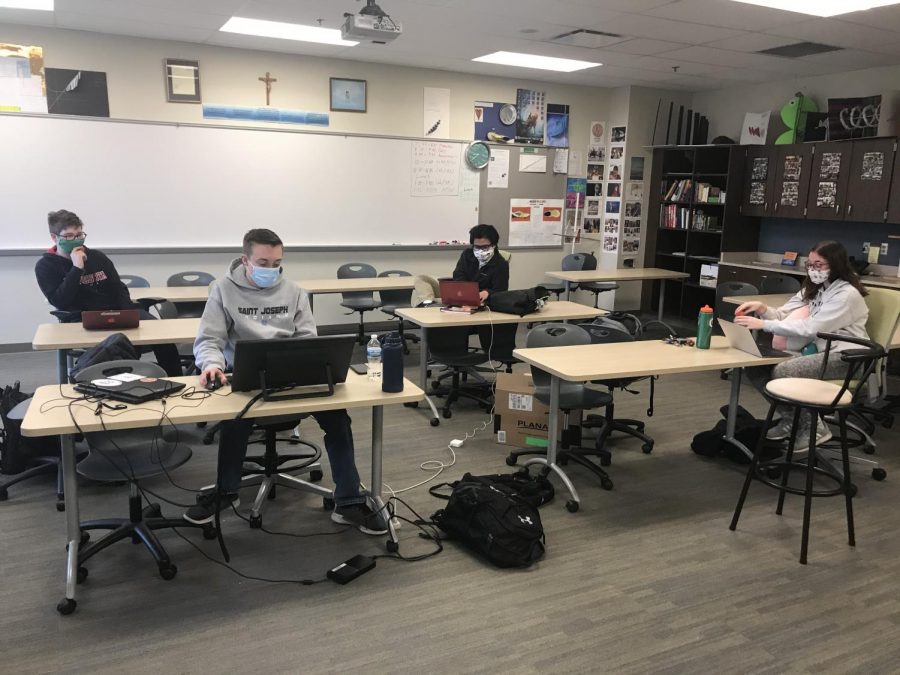 This year the challenge problem was titled “Defeating the Digital Divide: Internet Costs, Needs, and Optimal Planning”. The challenge first required teams to predict the cost per unit of bandwidth over the next 10 years. Next they created a flexible model to determine the minimum amount of required bandwidth for any household.

The team spent hours of intense calculations and coding to tackle these first two parts. Senior Dot Crumlish said, “We used MatLab code for the first part using a complex regression, and for the second part we created a super cool computer program with normal distributions that compiled the different distribution of needs based on given parameters to determine a function for the overall required speed of the internet for a given household”. Clearly, the solutions to these problems are not simple.

The last part of their three part problem was very challenging, as the team developed an optimal plan for distributing cellular nodes in a region. Dot says, “we used complex math reasoning to divide the region based on specific demographics and population density to determine the required need for an area, and then applied our program from Part 2”.

The Mathletes worked hard, but made sure to also enjoy its breaks throughout the day. The team bonded over meals and walked through the building as they got some well-deserved rest from complex math modeling. With just 2 hours left, they enjoyed some time at the Piano as Joseph Maffetone played songs from the film Up.

The team worked till the very last minute, as the last hour felt like a scramble. With three subproblems and pages of models, the Mathletes’ entire day of work was on the line in the last few minutes. Finally, with just 30 seconds left, the team submitted their completed challenge.

The team still awaits its results from the competition, but overall had a great day. The M3 Challenge is always a great experience, as the team members took on complex problems while bonding throughout a lively 14 hours. The Mathletes have had a great season so far, and hope to continue their success in future competitions.