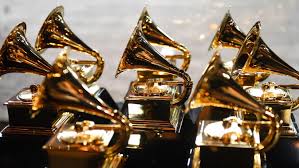 On March 15, 2021 millions of people tuned in to watch the 63th Grammy Awards, as the most iconic stars in music today were recognized for their creativity and popularity in the industry. Trevor Noah hosted the awards show which proved to be eventful and weirdly entertaining. There were many stunning performances and history was made when Beyoncé won her 28th Grammy.

Harry Styles performed his hit song, “Watermelon Sugar,” which would later win Best Pop Solo Performance. Roddy Rich performed “The Box” which received two nominations for Best Melodic Rap Performance and Best Rap song, and won neither. BTS performed from across the ocean in South Korea, the band recreated the Los Angeles stage for the performance. Taylor Swift performed “cardigan” along with “August” and “Willow” on top of the roof of a small grass covered cabin. Several other artists performed, such as Post Malone, Cardi B, Dua Lipa and Lil’ Baby.

Silk Sonic, the new performance group led by pop legend Bruno Mars and the soulful Anderson Paak debuted a new song, “Leave the Door Open.” With two great singers at the helm, the performance sounded sparkling. The two traded off verses in line with a quartet of singers wearing retro chic suits.

Beyoncé, who had nine nominations, the most of any artist during the 63th Grammy awards, made history with her 28th win. “Black Parade” took Best R&B Performance honors, putting her across the line set by the bluegrass artist Alison Krauss. She also won Best Rap Performance with Megan Thee Stallion for “Savage.”

Several other notable wins were Billie Eilish taking home the Record of the Year award, yet again, for “Everything I Ever Wanted.” After she won the award Billie Eilish dedicated the award to Megan Thee Stallion saying she should have won the award instead. Megan Thee Stallion later won Best New Artist. Taylor Swift’s “Folklore” won album of the year. “I Can’t Breathe” by H.E.R. won Song of the Year. Best Pop Duo/Group Performance went to “Rain on Me” by Lady Gaga & Ariana Grande.