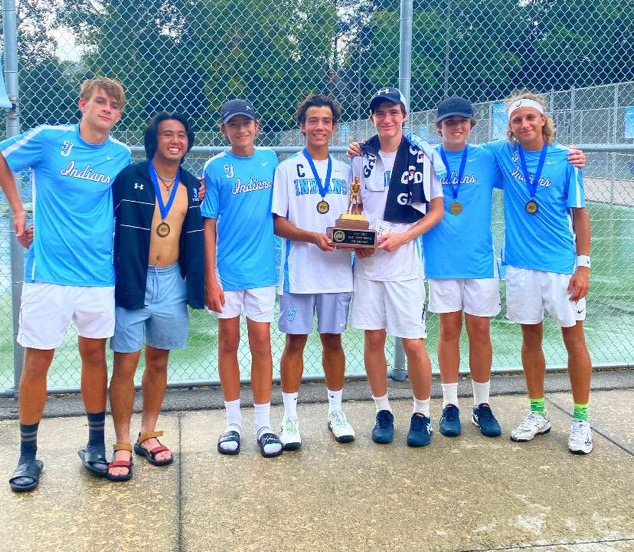 The Saint Joe men’s tennis team played in the NIC tournament on Tuesday at home.  The team took first ahead of Bremen and Penn.

The flight champions were 1 Singles player Daniel Pries, 2 singles Kyle Fernadez, and 2 doubles players Piotr Nabrzyski and Jake Westberry.  The runner-ups where 3 singles player Will Westbery and 1 doubles players Davis Borders and Colin Blumentrit.  The team scored a 61 total; ahead of Bremen in second with 53 and Penn in third with a 52.

Senior Captain Kyle Fernandez said, “It took the maximum effort to just come out and compete and it feels so nice to see that the hard work paid off but we are still not done yet with achieving our goal.”

Senior Piotr Nabrzyski said, “The guys went into the NIC tournament with nowhere to go but up, and with that determination and momentum we had exceeded our seeding with hard fought matches for the NIC win.”

The seniors have won the NIC tournament all four years that they have played in it.  Senior Captain Daniel Pries explained, “It was great for us to come together as a team and win our fourth straight NIC tournament yesterday.  We relied on supporting each other and using our strong support for each other ultimately showed everyone who is the best team in the conference.  Our teamwork and support for each other speaks for itself.”