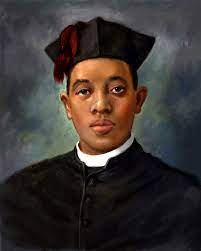 Father Gus, also know as Father Augustus Tolton, was born April 1, 1859. Father Augustus is a black Catholic on his path to Sainthood. In his early years his family and him escaped slavery, crossing the Mississippi river into Illinois from Missouri.

Father Augustus became the first Black American priest in the United States and served his first Mass in Quincy Illinois. He later was reassigned to Chicago to live out and fulfill his life of holiness serving God. In 1897 while on a retreat Father Augustus unexpectedly died at the age of 43. He left behind a legacy continuing on forever, Father Gus loved helping the poor and sick and feeding the hungry. Despite all the racial comments and all the hate he received, Father Gus was able to ignore and continue a life of service and devotion to God.

Father Gus was known for becoming the first Black American to become priest. Being born in America he became an American Hero. 160 years later father Gus is up for beatification and  canonization.  Fr. Tolton Regional Catholic High School is named in his honor and celebrates everyones uniqueness and differences. The way us as a community should live out lives and serve with joy.

On June 11, 2019 under the article “Father Toltons Canonization Timeline” issued the declaration that Father Augustus Tolton lived a life of heroic virtue thus advancing him to the title, The Venerable Father Augustus Tolton. As the Congregation meets and votes we pray for Father Agustus and ask that he leads us and helps us grow in Faith and Service. We ask for his intercession that we too may learn to ignore all hatred and live a life of holiness and devotion to God.