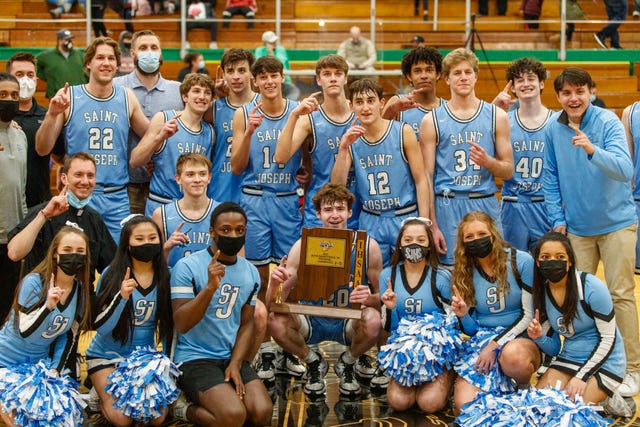 Last season the boys knocked off top-ranked Marian, John Glenn, and Hammond for the Sectional and Regional Championships. The Notre Dame recruit, J.R. Konieczny led the team to the Semi-State game where the Indians fell to Leo on a last-second basket. After a tough loss last year, the team looks to build on last year’s momentum and carry it through the regular season and make another state title run.

The varsity team will be led by first-year head coach Eric Gaff and his assistant Lee Ross. Coach Gaff carries his experience courtside as he played professionally in Europe and Australia for over ten years. After talking to the core group of seniors, it is evident that Gaff has placed his team’s leadership in the hands of the seniors. Gaff said, “A coach-led team will fail while a player-led team will thrive” as he believes leadership comes from within.

Specifically, this core group of seniors includes Guards Jack Quinn, Cole Hatkevich, and Declan Walsh and Forwards Jake O’Dell, Jacob Deahl, and Julian Karmanda. Over the summer, the boys played various teams from around the Michiana area and the offense and defense looked promising. The team competed at the SuperHoops tournament at Indiana Wesleyan University going 9-1 winning the Class 3a bracket. The combination between the semi-state run and the summer play is evidence that the boys look to continue their winning tradition in the upcoming months.

Senior point guard Jack Quinn’s commented on his outlook for the season, “We are very excited to get in the swing of things and build off of the success we had last year. Our team has grown a lot from last year and learned what it takes to make a deep postseason run. We look forward to making each other better every day.”

Improving every day will be key to the Indians success. With a team full of talent and chemistry, growth will be at the forefront of the team’s mind as they look ahead to their challenging schedule. Their second game of the season is against crosstown rival Adams that will be a heated battle as the Indians seek revenge from last year. The boys will also take on State Champion Blackhawk Christian and State favorites Marian and Penn. Coach Gaff and his team will be ready come March for their state-run in the playoffs.

The season officially tips off on Tuesday, November 30th against Concord at 7:45 PM. Information on the upcoming season along with the schedule can be found at the Saint Joseph High School website under the Athletics tab. For those looking to watch the boys live in action, there will be no Covid-19 limitations to capacity like last year. Wish the boys luck as they begin their season. Roll Tribe!