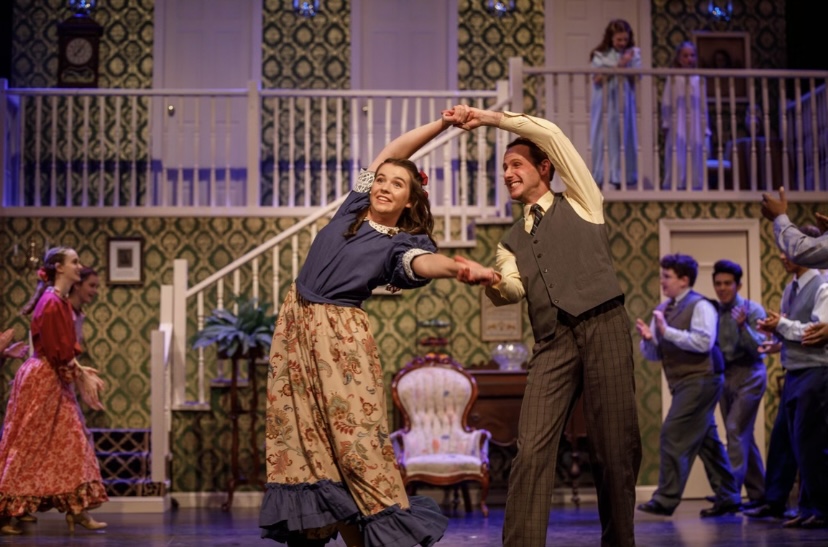 Acting is in her blood. Or so it seems since Caroline Mereness has been performing since the time she was five years old.

All the way back in kindergarten, she joined Premiere Arts, a theater company based in Elkhart, since then Mereness has been an active member of this community and performed in countless productions.

Beginning her career as a baby spider in Charlotte’s Web, Mereness has grown as an actor, singer, and dancer –  starring in many performances as a part of Premiere Arts at the Lerner Theater. She was Elsa in the 2019 Production of Frozen and Ellie Blake in the 2021 production of Disney’s Freaky Friday. Both of these roles left Mereness at center stage performing her heart out and dazzling the crowd with her beautiful voice and flawless dancing.

Mereness views Premier Arts as a second family. Since she began with the group at just five, they have truly seen her grow up. After over ten years of shows, she has spent thousands of hours rehearsing, performing, and simply spending time with all those involved in Premiere Arts. She is so thankful for her participation in this organization because it has opened so many doors that allow her to interact with people from all walks of life.

In a recent interview, Mereness explained the important roles that all cast members have in the outcome of a show. She has played all the roles: from the ensemble to supporting actress, to leading lady and says that in every show the entire cast plays a critical role. This idea of being a family carries over into how she views the production as a whole. She sees that every member of a family has an important role that helps to better the outcome of whatever situation is present.

As a member of Premiere Arts Caroline is exposed to different cultures and lifestyles and she feels supported by every single person she has met along the way. She describes the theater community as a whole as, “supportive and inclusive.” Mereness shares that she has met some of her lifelong friends through theater. She shared that everyone she works with is so incredibly talented and it is a blessing and pleasure to work with them.

As the star of multiple productions, Mereness has been the leader of more than one cast. When asked what it is like to lead a cast, she expressed the importance of leading by example. Especially when there are children in the cast it is critical to show them how to behave both on and off stage. During rehearsals, she tries to display an example of respect towards the director and other cast members so that others can follow in her lead and do the same.

“Dedication” was the reply when asked what theater has taught her. Through the exhausting hours of rehearsals and performances, Mereness has learned the importance of dedication when balancing school, varsity soccer, theater, and social life.

As mentioned before, Caroline was the lead lady in the 2021 production of Disney’s Freaky Friday. Thanks to her outstanding performance in vocals, acting, and dance Mereness has been nominated for an award. She is in the running for the Broadway World Regional 2021 Award for Best Performer in a Musical. This nomination is well deserved after her outstanding performance in May. Her vocal performance was unmatched and she tackled the challenge of her character with grace. In Freaky Friday Mereness’s character switches bodies with her mother so she played the part of a character being played by another actress. Her superior acting skill shines through and earned her a well-deserved nomination. (Below is a link to vote for Caroline)

Next year Mereness plans to attend college bringing her away from Premiere Arts and the Lerner Theater. While she is away she hopes to possibly pursue a major or a minor in theater and participate in extracurricular theater at whichever university she attends.