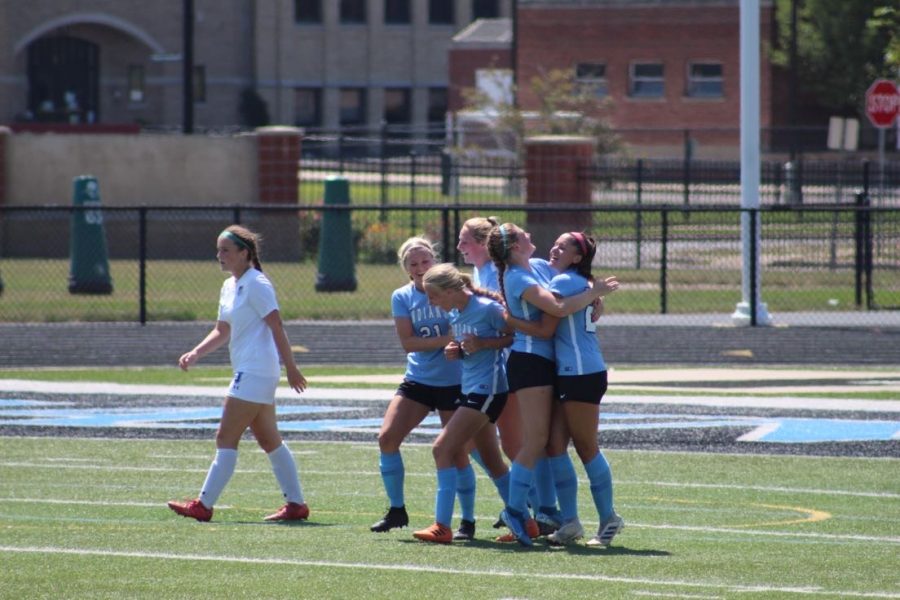 On Saturday, the Saint Joe girls soccer team kicked off their home opener with a 2-0 win over Lake Central. Indian goals were scored by Ella Scott and senior captain Georgia Place, while senior Hannah O’Connell had a shutout at goalie.

The hot August afternoon was not enough to hold the lady Indians from defeating Lake Central on Saturday with the score of 2-0. In the first half the Indians controlled the ball, but were unable to put the ball into the back of the net. Twenty minutes into the half both teams were given water breaks as the temperature reached 88 degrees and the scorching turf.

To start the second half Ella Scott shot from the top of the 18, from a lay-off from Georgia place, that found its way into the back of the net to Saint Joe up 1-0 in the 58th minute. Saint Joe went on to keep possession of the ball until the last five minutes as the Lake Central goalie attempted to dribble the ball upfield. Attacker Georgia Place stole the ball right from the goalie’s legs, and dribbled into the net to give Saint Joe the 2-0 victory.

I caught up with Georgia Place after the game to see how she felt about the Indians first home win of the season, she said, “It was a big win against a region team who was very physical and aggressive. The turf was a challenge, but the team was able to push through it to get the 2-0 victory.”

With a strong senior class the girls look to keep adding wins to their hopeful season as the Indians next game is an away game Thursday, August 27th vs. Northridge at 7:15 PM. (Tuesday September 1st Elkhart home 7). To keep up on the girls season you can see scores and schedule on the Saint Joe website:https://saintjoeathletics.com/teams/2892138/girls/soccer/varsity , follow the girls soccer team on twitter @SJGSoccer, or ask any of the soccer players about their upcoming games.