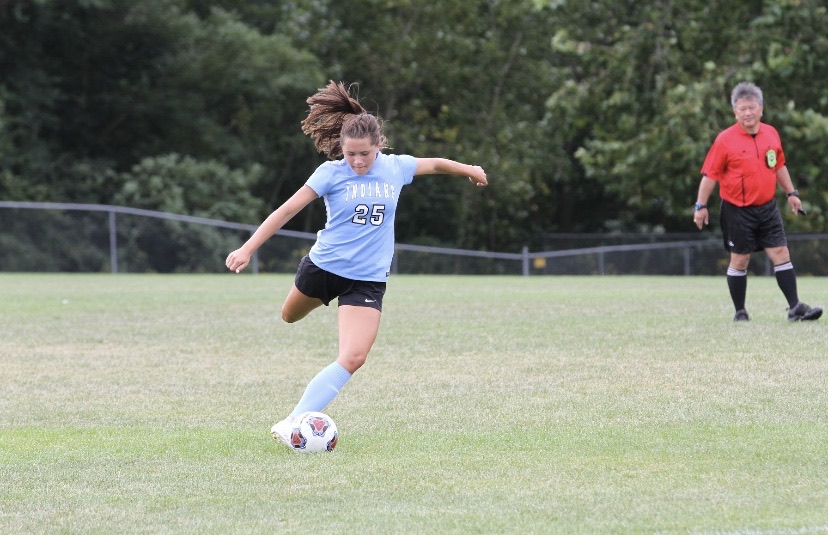 Twelve talented seniors make up the Saint Joseph High School girl’s soccer team, and all contribute to the team in their own special way. One specific senior, Georgia Place, has not only contributed to this team, but has led this team to its many accomplishments in the past three years including two state appearances and three sectional titles. Her impressive career on varsity as a four-year starter has been something special to say the least.

As seniors in this time of uncertainty, we know every practice and game has a special significance because it could be our last. As senior co-captain, Georgia is the perfect example of playing every game like it’s her last. Her teammates were asked to describe Georgia as a soccer player in one word, and to no surprise, words such as “tenacious”, “dedicated”, “passionate”, and “hardworking” were used. These qualities were the contributing factors to her two goals against Crown Point last Saturday, and her 7 goals this season in just 4 games. Her senior season will cap off a phenomenal four years in this program including 23 goals her junior season, 15 goals her sophomore season, and 22 goals her freshman season. On top of that she has earned awards such as first team NIC and first team all district.

When asked what this program means to her she responded saying, “this program means so much to me because it has created relationships with some of my best friends. It has taught me so much about life and not only how short it is, but how fast it goes by. This program made me love the game of soccer so much more and I’m so thankful for everything it brought me.” As a senior leader, her goal is to give back what she loves most about SJGS to her underclassman teammates, and help them have just as an amazing experience as she did. As highlighted in the quote, and known by all her teammates, Georgia cares so much about not only this program and her team, but the game of soccer in general. All her teammates look up to her because they know how much time and effort she puts into this team.

Georgia plans to continue her soccer career in college, but due to many setbacks in this time of covid-19, her decision about where has not been made. As a teammate of hers and speaking on behalf of all her teammates we are excited to see what she does in her future soccer career. As Georgia moves forward from Saint Joseph Girls Soccer she will leave big shoes to fill as one of our team’s top scorers, but her legacy she leaves behind will be one talked about for years moving forward. Most importantly, she will always carry the lessons and memories she created with the girl’s soccer program these past four years wherever she ends up and she will be a better player because of it.