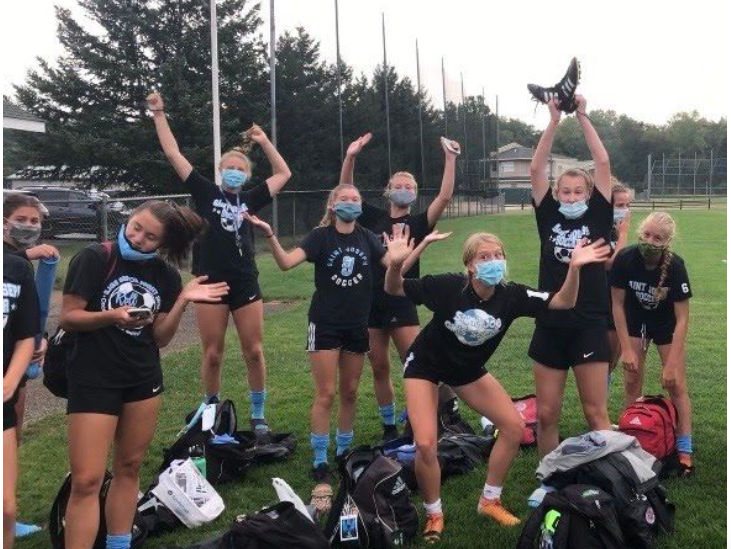 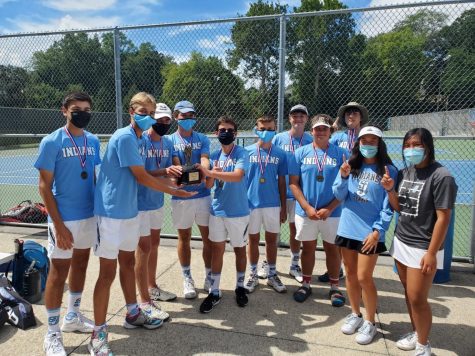 The COVID-19 pandemic has brought stringent new guidelines for fall Saint Joseph High School student-athletes. With many teams originally slated to begin workouts in June, teams had to wait until the 6th of July to begin their preseason, but in a limited fashion. Despite the seemingly impossible task, the IHSAA formulated new guidelines to give athletes across Indiana the chance to compete during the pandemic.

The football staff and team took numerous precautions. All equipment was fitted and distributed in a staggered but orderly manner. Players would sign up for specific times to come in for their equipment, in order to ensure that social distancing was maintained. Tuesday, July 7th marked the first official practice for the team. Right from the start, players were separated into different position groups, and were required to stay among those groups throughout the duration of practice.

Phase 1 lasted from July 6th through July 26. The athletes were to wear masks and practice social distancing among their groups, and were required to take a daily screening test which consisted of multiple Covid-19 symptom questions. There was to be no contact whatsoever between groups during this phase. Once phase two started, which lasted from July 27 through August 14, the football team continued to enforce social distancing among the players but contact was allowed. Shoulder pads and lower body protection were now permitted, allowing for full contact among the team, and in scrimmage situations with other teams. The regular season put teams into phase 3 on August 15. Despite all of the changes, the football team took on the challenges willingly in order to compete.

Right from the start the Saint Joe girls soccer team undertook some challenges caused by COVID-19. The IHSAA allowed summer conditioning to start July 6th. After two practices, several positive cases quarantined the team for two weeks. When the team returned, they maintained three sub-groups in order to distance themselves, and had to practice for two weeks with no contact. As the team headed into the season, the IHSAA came out with multiple guidelines for the team to follow during games and practice.  Wearing masks was required when entering and exiting the fields. Coaches must wear masks throughout practice. Coach Phil DePauw also asks the girls a series of screening questions regarding their health before they can step onto the field.

For games, the players are required to social distance on the bench, and wear masks if they are not playing on the field. There is no shaking hands with players from other teams after the games. The girls simply wave from their half of the field. When players score, they are encouraged to not congregate and high five their teammates, but to do a celebration instead. There are also rules put in place on the buses used for transportation to games. Only one player to a seat with the masks on the entire ride. There is also no eating or drinking on the buses. The new adjustments were challenging to get used to, but now with the girls a fourth of the way through their season, they have embraced the new guidelines in hope to finish the season strong and healthy.

For the Saint Joseph Boys Tennis team, tennis is an escape. With public nets taken down and tennis clubs shut down for months, the team was eager to get back on the court with their teammates. Among the many alterations to usual protocol, the team began splitting up into four groups, each led by a team captain. Head Coach Steve Bender assigned a cart of tennis balls to be used by players within the small group of seven; the tennis balls were meticulously organized by a numbering system to minimize contact. Everything from warm-up to cool down took place within this small block of seven players, allowing for the team to social distance and build camaraderie with those around them.

Following a 21 day stint with these restrictions, all the players could compete against one another. This new freedom allowed for coaches to better formulate the best possible lineup for the team and for players to bond with the entire squad. Today, four weeks into the season, the team is thriving and was even featured by the South Bend Tribune in early August. The team is taking nothing for granted and is doing their best to cherish everyday. As Head Coach Steve Bender says, “We must learn how to dance in the rain.”

As the fall season progresses, student-athletes continue to work hard on and off the field to further their athletic performance, build community, and mitigate the spread of the virus. The unprecedented 2020 season, filled with the echoes of masks and social distancing, shows how important it is to take advantage of any given opportunity for the Saint Joe athletes.