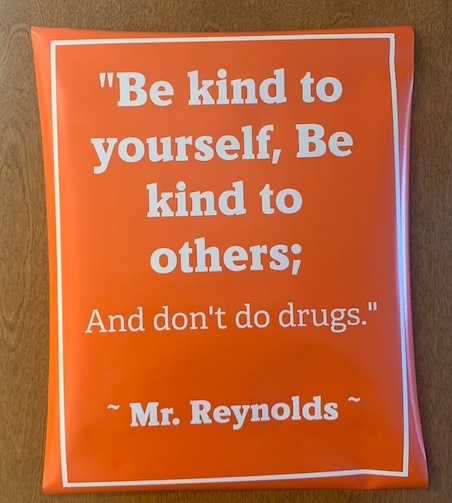 Mr. Reynolds went to Bethel University, where he majored in history and minored in theater arts. At Saint Joe Reynolds teaches AP Government, AP Macroeconomics, and AP Microeconomics. His start at Saint Joe came in a relatively abnormal way. All of Reynolds’ student-teaching occurred at Clay High School, but in 2015 then World History teacher Mrs. Alter had to take maternity leave, giving Reynolds’ the chance to step in. He has taught at Saint Joe since then.

Teaching at Saint Joe is very meaningful for Reynolds. Teaching social studies allows him to dive into current events in ways that no other subject can. Reynolds does not shy away from any controversial topics, believing that “Living under a rock is not a good approach to life.” As a teacher, Reynolds has the privilege to bridge the gap between the class content and the real world. Reynolds also does not leave any topic off-limits. This is because he believes that anything connected to your content area should be discussed, whether it be a simple student question or a massive class debate. Living in an ever-changing world makes social studies an ever-changing subject, and sometimes having a class discussing current topics makes not only the students more informed, but also the teacher leaves with more knowledge and viewpoints. Reynolds’ favorite part of teaching is how he can impact his past students.

Reynolds’ also went into great detail describing the Saint Joe theater department. According to Reynolds, plays are “a smaller production with fewer components so I tend to make those selections myself.” Making the decision himself gives him complete freedom over the casting and the character choices. Reynolds’ often chooses comedies or murder mysteries as they are fun and engaging for an audience. The play has some limitations, one of which is a set-in-stone cast. This means that there will be cuts in the play, something that Reynolds puts down to the deeper interest in theater from members of the play. The musical requires a little bit more of a group effort, with co-directors Mrs. Amy O’Brien and Ms. Sarah Beason weighing in on the decision of musical and casting. However, a flagship of the Saint Joe theater program is its ability to be no-cut. When asked about this Reynolds’ said,

Reynolds has a widespread positive reputation at Saint Joe. He puts this down to his genuine care for all students and his involvement in multiple aspects of the community. Reynolds also is heavily inspired by his students, wanting to be the best he can be for them. His parting words of advice: “Make the most out of High School, show real value to your friendships and your coursework. It will pay you back in the long run.”