Silver Linings in Sticking Together 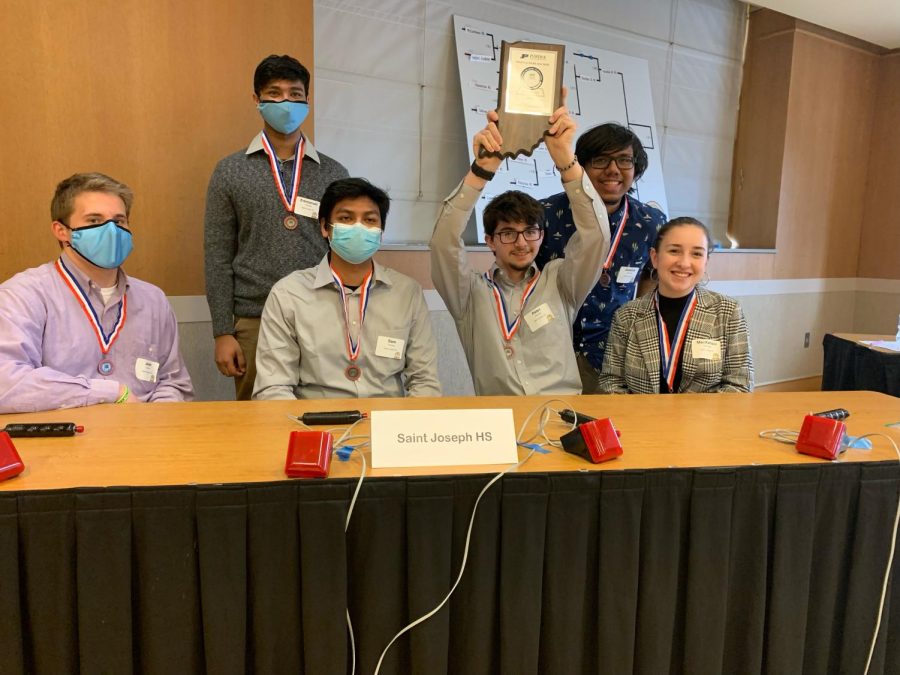 The team poses with their silver plaque at state.

The Quiz Bowl team closed out their season by competing for their tenth consecutive state title. Despite falling to Carmel in the finals, the team is still committed to finding the silver linings of their season.

Six varsity members traveled down to Purdue, which included five seniors Josh Culver, Peter Dolniak, Jose Pimentel, MacKenzie Schmeltz, and Captain Sam Thomas, and junior Emmanuel Thomas. In the morning, they plowed through Valparaiso, Andrean, and North Central High Schools, and then finally faced off against Carmel. Their opponents gained momentum during the second half of the match with several powers in a row (buzzing in on the first clue and earning an extra 5 points), with a final score of 175 to 535.

The team kept their head in the game as they went into the “Bounce Back Bracket” against Hamilton SouthEastern. They won with a score of 430 to 110, and took this confidence into the match for gold, again against Carmel. This game proved much closer than the one earlier in the day, with Saint Joe winning by 15 at the half. In the end, Carmel won over Saint Joe by a margin of three questions, 275 to 410.

Despite falling short of a “ten-peat” as coach Mr. Dillon calls it, many of the players still had a positive attitude, enjoying the “silver linings,” as Pimentel repeatedly has joked. When questioned about their outlook, the team agreed that there is a sense of joy being together, and each one is in awe of the other’s talents. As a testament to their bond, S. Thomas says,

Several others echoed his statement, acknowledging that Quiz Bowl really is a team sport and each person’s unique knowledge base is vital to their overall success. Obviously, there are some players that are exceptionally good at what they do. Culver has been a four year member of the team, and has seen many great quiz bowlers graduate. He vocalizes how anyone who witnesses a match feels, saying that, “Their, and Sam’s, nonchalant excellence has always amazed and encouraged me.” Driving home this point, Dolniak says,

Each member has a deep respect for the others, grateful and impressed by their individual skill sets, and the team’s ability to play into each other’s strengths and compensate for their weaknesses is truly what has made them so successful.

Reflecting on this past year, the team is able to appreciate their many successes as part of their “silver linings”. During the regular season, Saint Joe went undefeated in the Saint Joe valley League, and once again claimed the conference championship. The team also participated in various tournaments throughout the season. At SWIM N WIN, or the Southwest Michigan North Western Indiana Invitational, the Varsity Squad of Sam Thomas, Emmanuel Thomas, Peter Dolniak, Josh Culver, and MacKenzie Schmeltz placed first, continuing their undefeated record spanning the history of the tournament. S. Thomas and Culver were also recognized as the first and eighth individual scorers respectively.

Later in the season, they also went to the Purdue Buzzathon to face off against some of the top teams in the state. The “A” team of S. Thomas, Dolniak, and Culver only lost to Carmel “A” and “B” teams, claiming third overall. Individually, S. Thomas was recognized with the highest net points per game average. Schmeltz of the “B” team was fourteenth overall, and Simon Noem of the “C” team was sixteenth, with all three being awarded books in place of medals.

Looking ahead to the 2022-2023 season, future captain Emmanuel Thomas acknowledges that we have a talented group of seniors graduating from the team this year. However, he says, “we have a lot of potential” and notes that continuing to earn a successful record is possible “as long as we keep practicing and put in the effort.” Congratulations to the team on another outstanding season, and we look forward to witnessing Quiz Bowl’s success more in the years to come.