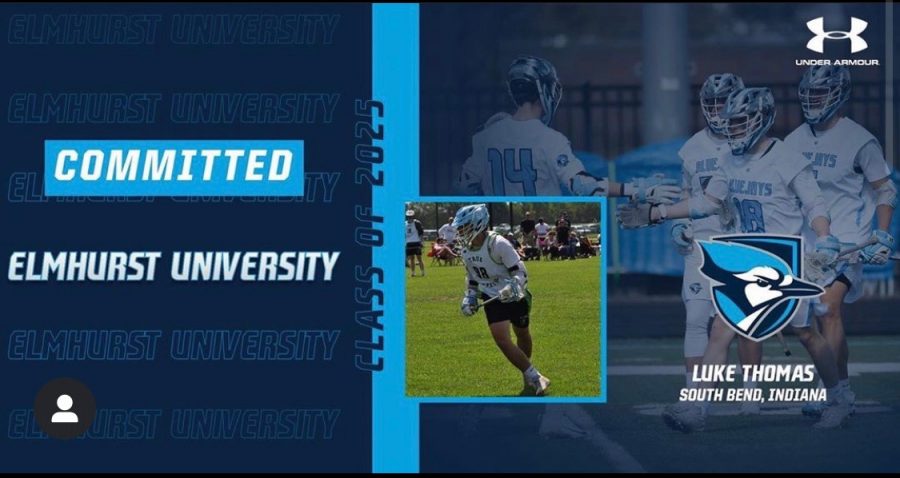 Senior Luke Thomas is heading to Chicago to further his academic and lacrosse career at Elmhurst University. He committed just last week and is excited to prepare for the division three process.

Luke started playing lacrosse in seventh grade after a few of his friends convinced him to join the team. As soon as he stepped onto the field for the first time, he fell in love with the game. He started out as a defenseman, but still had a lot to improve on. Going into eighth grade Luke joined the Northern Indiana True Lacrosse travel team, and switched to attack where he was a natural.

To start his high school career Luke scored a goal in his first game against the South Bend Bears and hasn’t stopped since. In his sophomore year Luke started at attack and scored 17 goals, and had 23 assists which caught the eyes of college coaches. In his junior season debut against Crown Point Luke scored three goals before he was able to show off his skills, as the season was cut short because of COVID-19.

The pandemic did not stop Luke from putting in the work, and getting his name out there to college coaches as he attended multiple camps, and tournaments. Luke received division two and three offers from Wabash college, Illinois Wesleyan, and Ohio Northern University, but ultimately chose Elmhurst University. When asked why he chose Elmhurst over the other schools he responded with, “I chose Elmhurst for the location, it’s just twenty minutes from Chicago and my sister along with being an hour and a half away from home. I also loved the coaching and the style of offense they play, along with the program being built.”

Luke is excited to make up for the lost junior season by giving it his all for the upcoming senior season. He hopes to improve as much as possible, and lead his team to a state championship. Congratulate Luke Thomas in the hallways on his commitment, and catch him on February 5, for national signing day.